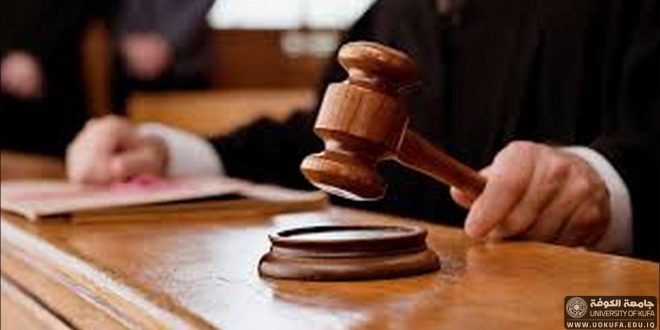 The Instructions of students discipline in the Ministry of Higher Education and Scientific Research Institutions No. (160) for the year 2007

We issued the following instructions:

The student should committed to the following :

First – the student should be committed with laws and regulations and internal regulations, orders issued by the Ministry of Higher Education and Scientific Research and its institutions, which (university, body, college, institute).

Second – religious beliefs, national unity and national should not be compromised or Stirsectarian strifeinWord or deed.

Third – not to harm the reputation of the ministry or its institutions by word or action inside or outside it.

Fourth – Avoid everything that is incompatible with the university behavior of high discipline and respect for the administration, faculty, staff and fellowship relations and cooperation between the students.

Fifth – the True disorderly behavior is positively affect on appointment and nomination of Scholarship and fellowships.

Sixth – Refrain from any action that disorder, tranquility and serenity on campus (college or institute) or participating in and abetting or covering up the Actors .

Seventh – Maintaining the supplies and properties of the university or organization, college or institute.

Eighth – the good functioning of the study at the college or institute should not be disturbed.

Ninth – the students should committed to the uniform Taking into consideration the specificity of each university or institute.

Tenth. – avoiding the call to or establish regulations that will deepen the practice of segregation or any variety of forms of political persecution, religious or social.

Eleventh – avoiding publicity for any party or political organization or ethnic group or national or sectarian whether it’s hanging pictures, banners, posters or seminars.

Twelfth – avoid invitingPartisan figures to give lectures or seminars set up a partisan and religious propaganda on campus in order to preserve national unity.

First – failure to comply with uniforms scheduled at the university and body.

Second – harming the relations of fellowship among students and bypassed by saying on one of the students.

First – if he did an act the involved to punish by him reminding after he already punished with the same punishments.

Second – breaching of order and tranquility and serenity in the university or organization, college or institute.

The Students are punished by dismissal for a period of thirty (30) days if he commits one of the following offenses:

First – if he did an act the involved to punish him by warning after he already punished with the same punishments.

Second – bypassed by saying on one of the non-members of the university faculty members.

Third – the defamation to one of faculty members, including harm to him within the college or institute or outside of them.

Fourth – he put posters – on campus – which disturb public order and morality.

The Students are punished with temporary dismissal from the university for a period not exceeding one academic year if he commits one of the following offenses:

First – if one repeats committing the acts stipulated in Article (4) of these instructions.

Second – practice or instigated the sectarian and ethnic blocs or political gatherings or a party on campus.

Third –assaulting on one of the non-members of the university faculty members.

Fourth – the use of violence against fellow students.

Sixth – carrying different kinds of weapons, without vacation or a vacation on campus.

Seventh – causing events that deliberately led to the serious damage to university properties college or institute.

Ninth – IX – bypassed by saying to a member of the faculty at the college or institute or outside of them.

tenth. – harming the university’s reputation and authority by saying or deed.

Eleventh – deliberate breach of the good functioning of the study.

Twelfth – the existence of evidences showing the student committed fraud on his fellow students and staff of the college or institute.

Students are punished with final dismissal from college or institute and with a decision of the university if he commits one of the following offenses:

First – if the student repeats one of the violations set in Article (5) of these regulations.

Second – assaulting already a member of the faculty or lecturers at the university or organization, college or institute.

Fourth – providing any documents, books or forged documents with the knowledge of being forged or being one of the instigators of the fraud.

Fifth – proven guilty with an act that disturbs the peace and tranquility inside the campus or his participation in it or help it.

Sixth – when he has been judged with a felony or misdemeanor involving moral turpitude of his sentence than where for more than a year.

First – it does not prevent the imposition of penalties stipulated in Articles (2) and (3) and (4) and (5) and (6) of these instructions on the offending student, to impose other sanctions if the violation is subject to penal laws.

It is the dean authority to form a committee of students disciplinary Headed byAssociateDean andmembership of thetwofaculty members (one of them must be legal experience ) and A representative of the Students’ Union (Elected) and it asking one of the administrative staff to act as Commission decision.

It shall not impose any disciplinary punishment unless recommended by the Disciplinary Committee of students.

Disciplinary sanctions set forth in these regulations imposed by a decision of the Faculty Council or the Institute , and the council has the Validity to authorize to the dean of the faculty or institute.

First – the reminding and warring punishment is deterministic.

Second – the student who dismissed from the college or institute has a period not exceeding thirty (30) days to object to the dismissal decision at the Faculty Council or the Institute and the decision shall be final.

The Students can object to to the decisions set forth in the items (2) and (3) and (4) of Article (11) of these instructions during a period of the seven (7) days from the date of notification of the decision issued against him, if can not be informed him , he may veto within (15 ) fifteen days from the date of publication of the dismissal decision on the bulletin board.

The penalty decision is hanged in the bulletin board at the at the college or institute in a a period of not less than (15) fifteen days, and the decision is reported to the student’s Guardian in writing.

The Higher Education instructions of students discipline No.(19) for the year 1989 are repealed.

These regulations implemented from the date of its publication in the Official newspaper .